Heat transfer analysis is a very important part in determining the fire resistance of a structure.

In Eurocode EN 1992-1-2 (2004) (section 4.3.1 (3)) it says: “Advanced calculation methods should include calculation models for the determination of: the development and distribution of the temperature within structural members (thermal response model)…” ;

In the Russian construction code and standard called “Rules to ensure fire resistance and fire safety of reinforced concrete structures. No. 36554501-006-2006.” (section 4.13) it says: “It is recommended to analyse fire resistance and fire safety according to the reduced section, when the section of the element is divided into small sections heated to different temperatures, and each small section is reduced to unheated concrete, taking into account the corresponding reducing characteristics of concrete strength”. In paragraph 5.3. it also says: “The temperature of the concrete is determined by the thermotechnical calculation ...”.

Therefore, it’s safe to say that there's no way around the heat transfer analysis 🙂.

Let’s consider an example of determining the heat distribution caused by fire, in a cross-section of the beam with dimensions of 160x320 mm. Since the beam is not of variable cross-section, we can consider it as a plane problem, where the thickness of all elements is equal to one running meter of the beam (1 m).

Firstly, we have to create an analytical model of the beam cross-section in the Model type 15 (see picture 17).

How did we determine Thermal conductivity coefficient and Specific heat of the material?

In the Russian construction code and standard called “Rules to ensure fire resistance and fire safety of reinforced concrete structures. No. 36554501-006-2006.” (section 6.3) it says, that for heat transfer analysis, it is recommended to take the thermal conductivity coefficient and specific heat of concrete according to the formulas (we consider an example of heavy-weight concrete):

Notes. In the code, the negative sign is written in the formula for determining the specific heat, but this is a misprint because the specific heat of the system increases with temperature increasing. This is explained by Einstein theory of specific heats.

After that, we begin to apply the boundary conditions (external load). In Load case 1, we select all the nodes of the model, and define them a constant temperature, which is equal to 20 °C. This is a standard value for the pre-history, as the average temperature of the structure before the beginning of the fire is considered to be 20 °C. After that, all the nodes are colored green, Fig. 17.

As stated before, there are 3 main types of heat transfer. We have already taken into account the heat conduction inside the body (when we defined the stiffness). All that is lacking is to include the convection and radiation.

Therefore, to simulate convective heat transfer, we create two-node thermal convection finite elements on the sides of the beam that are supposed to be exposed to fire: left, bottom and right (Fig. 19, b). We create "stiffness" for the convection elements, and there we define thickness of our section

. A film coefficient of 25 is typical value for a standard fire diagram.

The next step is definition of environment external temperature. To define it, we use the type of load called Defined t°:

We define the load on convective elements in Load case 5, but Load case 2-4 we leave empty. In the window of temperature definition (Fig. 18), we write down the unit. A little later, at the stage of creation of Time history analysis from static load case, we will apply a diagram of temperature changes during fire accident. The values of temperature from this diagram will be automatically multiplied by the value, which we enter in this window. Since we do not need to change the numbers from the diagram, we just write the unit in the window of the temperature definition (Fig. 18). 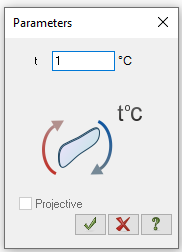 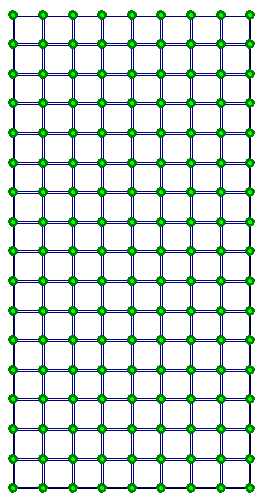 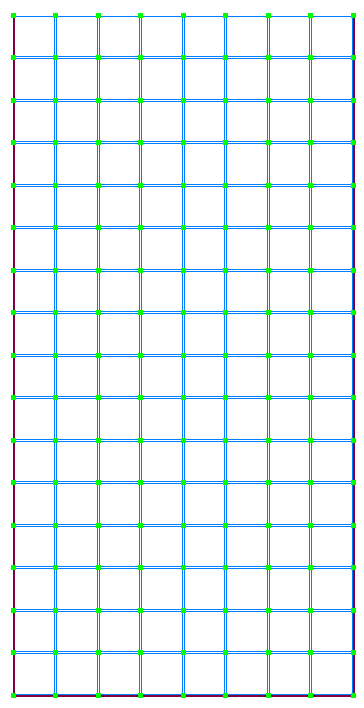 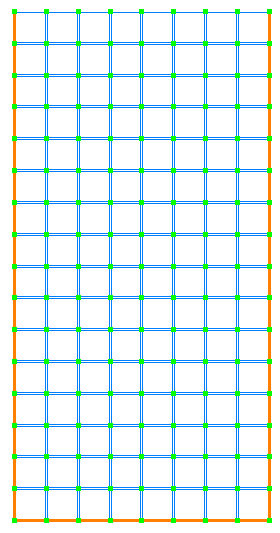 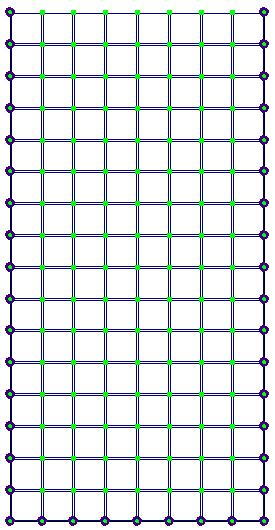 Picture19. Stages of applying the load on the analytical model

As mentioned above, thermal radiation is a type of heat transfer that occurs by absorption of electromagnetic waves. Pay attention to the following thing: in the case of convective load, we specify the contact surface area through the stiffness of the convective element (when we define H = 100 sm); but in the case of radiation, the contact surface area must be specified through the Heat flux applied on a node or on an edge of a plate, (in the case of a solid finite element, the heat flux must be specified on the element face). During the analysis, at every integration step, this value will be multiplied by the product of:

is the temperature from the fire diagram, which would be set at the next step, and

is the temperature at a node of the analytical model.

The question immediately arises: why do we have to specify the area by the load? And it's fair 🙂

Way 1 (when we set the heat flux on node)

Heat flux on node is determined as heat flow

, multiplied by the area through which the flow passes

. In the case of radiation, we suppose that heat flux is equal to 1. We just have to find the absorption area which comes on each node of the model.

If we consider a part of the analytical model (Fig. 20), where the dimensions of each FE are 20x20 mm, and the thickness is equal to 1 m, then the contact surface that comes on 1 node is equal to:

It means that in Load case 6, for every contact node we apply the heat flux, which is equal to 0,02 m2∙1

Picture 20. Determination of the contact surface area for radiation

Way 2 (when we set the heat flux on edge)

Similar to the previous way, the heat flux per edge is determined as heat flow

, multiplied by (in this case, not by the area, but by the plate thickness) H, [m]. The load is automatically multiplied by the length of the edge during the calculation (similar to the load on the plate edge in the strength problem).

To apply the load just on certain faces of finite elements, you need to select all the nodes of these faces, and also select the finite elements themselves to which these faces belong. When applying the Load on plates (Fig. 21), check the box for auto select of the faces on which the load must be applied. Thus, for our model, in Load case 6, we have to apply the heat flux on all contact faces, which is equal to: 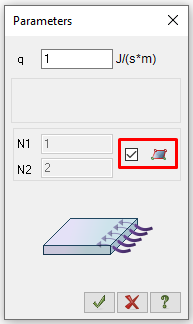 Picture 21. Selection of the loaded edges

To simulate the fire action, we use the standard fire development diagram, which is determined by the formula:

We push the button Convert static load cases, and define the change of convection in time, which depends on the fire temperature. We convert the dynamics from the 5th Load case (convection), (Fig. 22, a). After that, we set there 21 points for the fire diagram, plus one point at the moment of time 0sec, the temperature value in which, we do the same as in the pre-history = 20 °С. Time is set in seconds (left column), temperature - in degrees (right column). 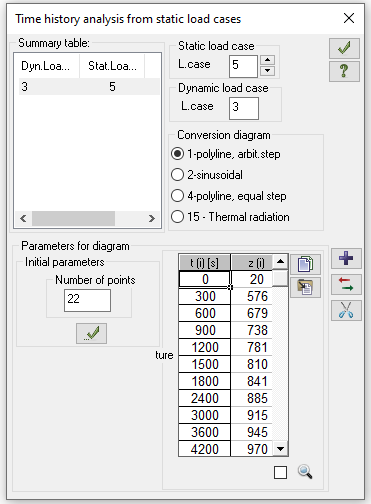 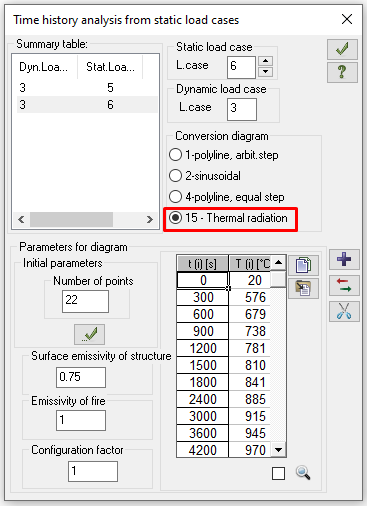 After that, we form radiation (in the same way), which also depends on the temperature of the fire (Fig. 22, b). Then we create the dynamics from Load case 6 (radiation), and use the convertion diagram No. 15 - Thermal radiation. And we define Surface emissivity of structure = 0.75 (for concrete), Emissivity of fire = 1, and Configuration factor = 1, since we consider that the fire is located directly near the beam.

And we click on the button Time history analysis: 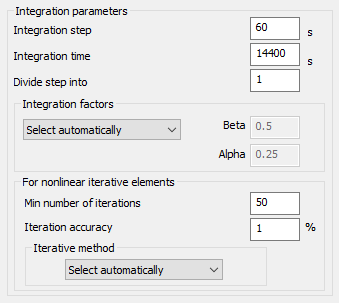 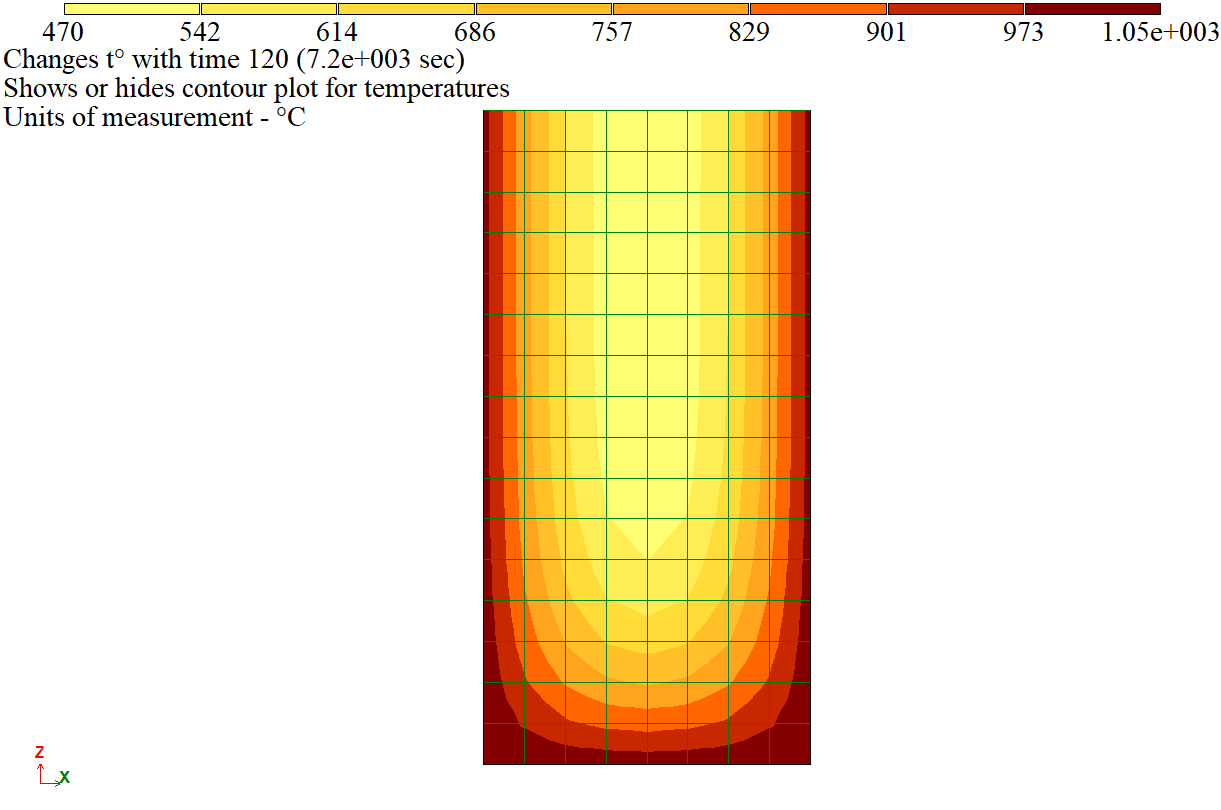 Upper, there is an example of temperature contour plot with time 7200 seconds (which is equal to 120 minutes of fire action).

In concluding, one can add that there is no need to analyse a simple cross sections manually, every of them should be recalculated in Model type 15 and imported into Model type 5 for strength analysis. This can be done through the Fire Resistance tab in the Reinforced Concrete Analysis Module, when defining materials. After accounting for fire resistance is formed, reinforcement will be selected in the element taking into account the fire resistance limit of the structure. 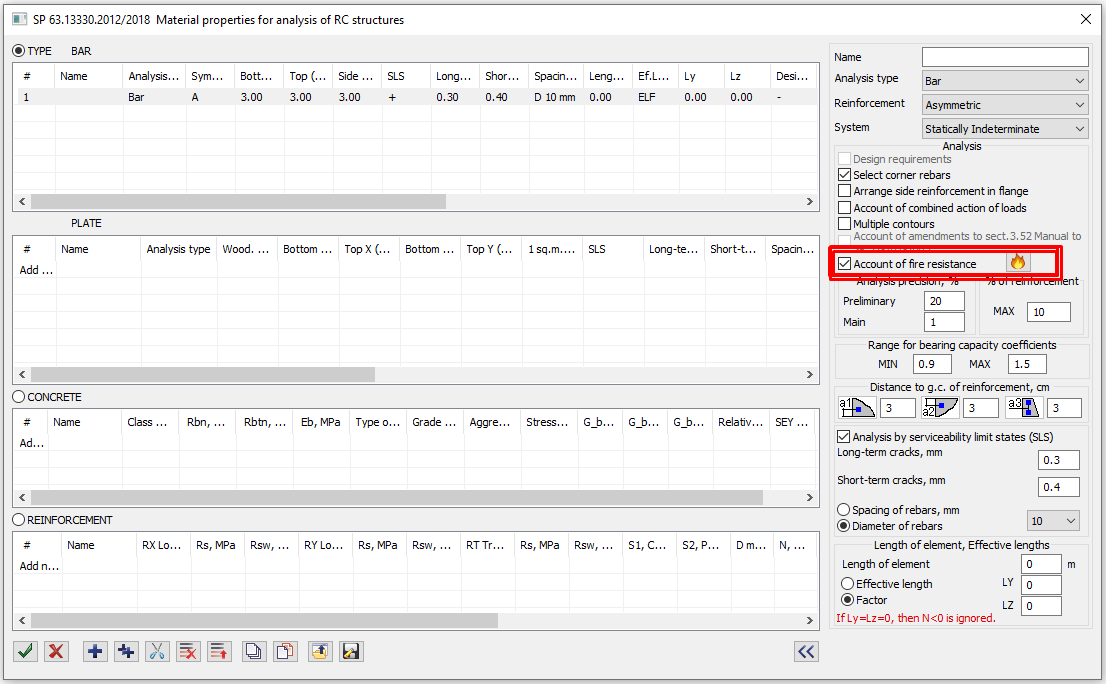 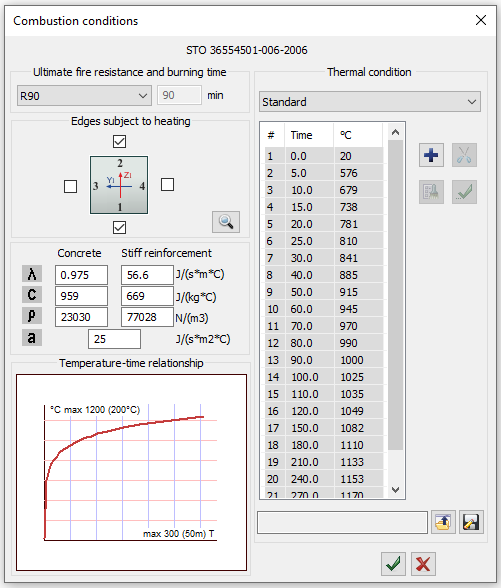 But thanks to Model type 15, a user has the opportunity to analyse the fire resistance of a section or a solid body with any configuration and complexity.