The previous versions of LIRA-SAPR contained ‘Graphic Organizer’ system where screen copies were saved. But they were nothing more than copies of the screen images. The Report Book replaces the ‘Graphic Organizer’ system in new version of the program. When you save the screen copy in Report Book, the state of design model is saved together with the image presented on the screen. It is possible to return the model to this saved view (with its state, e.g. projection, colour palette and fragmentation) at any time later. So, the first benefit of interactive screen copies is that it is possible to fix the view of design model and return to it later.

As often happens, to obtain required fragment of design model you should repeat rotation & selection commands several times. That’s why, the ‘Return to Fixed Fragment’ tool would be really helpful. So, the second benefit of interactive screen copies is that it is possible to fix the fragment of design model as well as viewpoint and location for the fragment in order to view other types of analysis results. 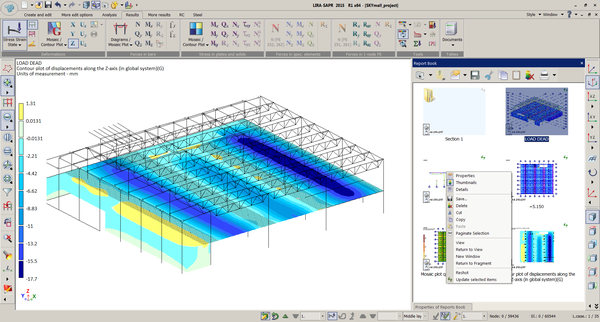 In case when documentation about analysis is ready but it is necessary to modify design model (e.g. loads, location of openings, triangulation of plates, etc.), then all interactive screen copies may be updated in one click. The third benefit of interactive screen copies is that they may be automatically updated when design model is modified. The Report Book contains algorithms that make it possible to update the screen copy after renumbering, re-triangulation, adding openings and even modifying configuration of the presented fragment of the model.

In previous versions of LIRA-SAPR program, two table formats were supported: text format – satndard tables and format similar to Excel – so-called interactive tables. The first format allowed you to generate the table of arbitrary size, while the second one – to take advantage of evaluation tools for the tables up to 16.000 rows. New type of output tables enables you to evaluate tables of any size. Evaluation tools include filters by values, cumulative sort mode by several columns and selecting on the model nodes/elements corresponding to the certain rows in the table. The table may be evaluated in external editor, such as MS Excel. 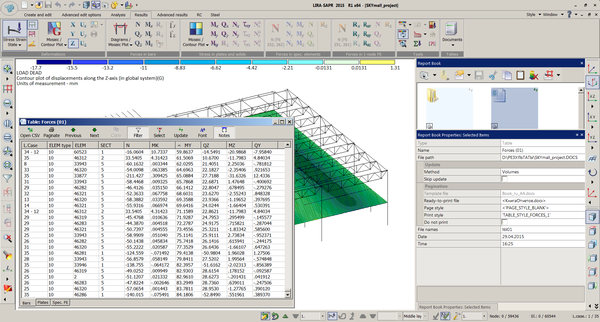 In previous versions, you could not generate the table for the first ten elements of design model and then generate one more table for the next ten elements as the next table always overlaps the previous one. Now in the Report Book you could save any number of tables that differ only in list of elements. As the screen copies, the tables may be automatically updated by one click after renumbering, re-triangulation, adding openings and even modifying configuration of the fragment of the model presented in the table.

By default, all elements are located in the same folder, however you could organize them by different folders, for example ‘Fragments of the model’, ‘Reinforcement in slabs’, etc. Mutual location of elements inside the same folder is organized with Cut & Paste commands. If required, you could also insert text elements (notes) between screen copies and tables. 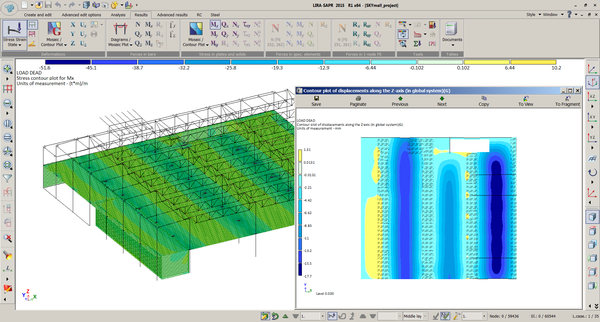 Export to MS Word and printing

By a single click, all (or selected) elements of the Report Book may be generated to a single file of *.docx format. This procedure is called pagination (that is, laying out printed pages, which includes page numbers, margins, headers, footers, etc.). Paginated file may be opened in MS Word or in free MS Word Viewer. It is also possible to open paginated file in OpenOffice and WordPad but it is not recommended as these programs have limited capabilities to present *.docx files properly. 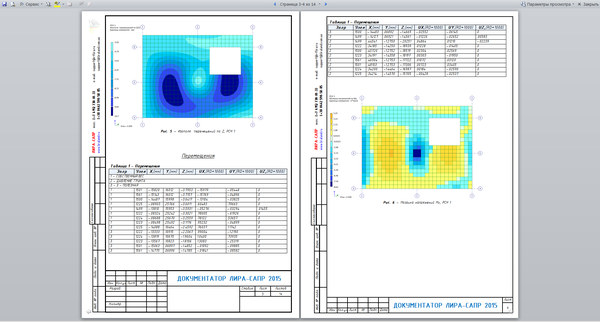 For every item in the Report Book, before pagination the user could define new styles for page and printing: fonts, title blocks, headers and footers, size and orientation of pages. To create these styles manually, simply customize the template file for pagination. By default, all Report Book is paginated as single *.docx file. But if you define different name of ready-to-print file for different items of the Report Book, then it is possible to generate several *.docx files together (from one Report Book) while paginating. It will be helpful if you have to insert several items of the Report Book as linked documents to the one common file. These items also will be updatable, but to update them you will have to use two buttons: Update and Paginate.

To print the paginated document(s), use MS Word or MS Word Viewer programs.